London has been placed in the top three Best Cities for Millennials and crowned number one for enjoying a fun lifestyle. The recent study ranked 63 cities against 16 factors including graduate work prospects, employment rates, income and entertainment. A shining example of this research is 25-year-old post-graduate student Matt Brighton. With the support of Notting Hill Genesis’ Shared Ownership scheme, he managed to realise his dream of owning his own home in one of the capital’s most exciting and sought-after districts, in Stratford at New Garden Quarter, E15.

First time buyer Matt explains: “Originally from Sheffield, I moved down to London in 2015. My original plan was to live in London for around eight months but ended up staying as I liked it so much. I was renting a house near the Olympic Village in Stratford with three of my work colleagues for about three years, and decided the time was right for me to look for a place of my own. I decided to buy in Stratford because I already knew the area well, I had made friends here and it also has a lot going for it. The change in this area from 10 years ago is huge, and even three years ago when I first moved here, the regeneration that has taken place is amazing. I had looked at a few other developments, but many were only offering support with the London Help to Buy scheme which would only enable me to purchase a one-bedroom apartment. Having seen the New Garden Quarter development taking shape, I made a few enquiries and very quickly realised by using Shared Ownership I would be able to afford a two-bedroom property, which was brilliant!” 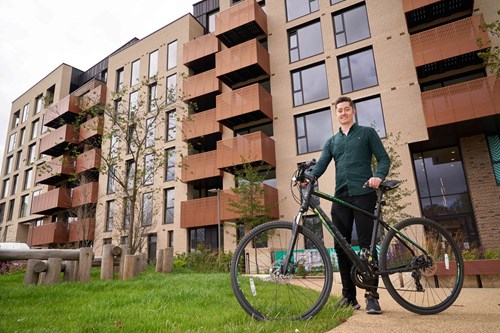 Talking about his commute to work, Matt explains: “I have been commuting to work by train but I have recently found a really nice cycle path that runs through Victoria Park along Regents Canal which takes me pretty much to my office, and it’s a lot quicker. So I’ve actually been and bought myself a new bike, and I’m really looking forward to making the most of the warmer summer weather. If I do need to take the train, Stratford International station is a few minutes’ walk away and I can get to Kings Cross in six minutes from there or head off out of London to visit family and friends..”

For more information about the last remaining one bedroom apartments at New Garden Quarter or any other developments by Notting Hill Genesis, visit www.nhgsales.com or call 020 3815 1234 to book your virtual appointment to view.

NEXT: take a look at the Shared Ownership homes we have available right now