Silvertown sits in the heart of East London between Canary Wharf, The O2 and London City Airport and was named after the former rubber factory owned by Samuel Winkworth Silver that opened in 1852. Nowadays it is still home to the great sugar refinery, created by the merger in 1921 of two businesses owned by bitter rivals Henry Tate and Abram Lyle. Many would assume this is how this East London dockland town developed or at least got its name. But the area is secretly synonymous with a strange obsession with the Far East. From high society’s peculiar fashion trend of bringing pineapples to parties to escaped wildlife carrying off young children, Silvertown has an extraordinary and colourful history waiting to be discovered.

1500s – A mysterious obsession with the East

Consumerism is far from a 20th century phenomenon that started in the United States. It was alive and well as far back as wealth and the ability to transport foreign produce existed. Europe’s high society obsession with the mysterious East began in the 16th century, and by the 18th century the river ports saw a constant inflow of fine Chinese porcelain to satisfy the appetites of kings, princes and the emerging middle classes.

Other items traded through the ports included exotic fruits such as pineapples. Back in the day a curious, highly luxurious and costly item – the crown-like top and gem-like texture was seen as a symbol of taste and affluence. In fact, the fruit was so desirable and rare that consumers often rented a pineapple for the night to show off to fellow party-goers.

In this year, one Charles Jamrach, whose menagerie near the docks imported exotic creatures from all over the world for the amusement of Londoners, was fined by the magistrate for allowing a tiger to run loose and carry off a young boy in its maw. Unthinkable today, but not the fact that of the £300 fine, £240 went towards the lawyers’ cost!

The Thames Barrier Park was opened in 2000. The design is by landscape architect Allain Provost of Paris and architects Patel Taylor of London. The green trench running through the park was intended as a reminder of the site’s dockland heritage. 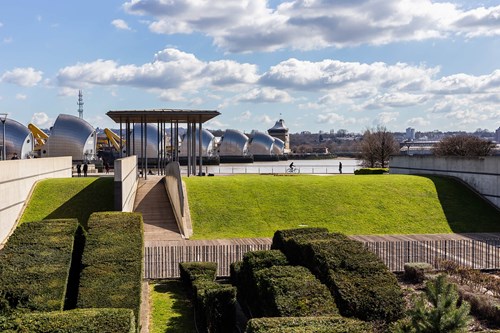 Make your move to a home near Silvertown

We have three developments near Silvertown within the Royal Docks; Royal Albert Wharf, Gallions Place and Woolwich Reach.

In a prime position, where the River Thames meets the Royal Docks, our flagship and award-winning Royal Albert Wharf development now only has three bedroom apartments remaining for private sale. These come with parking, concierge services and on select apartments, are available to buy via Help to Buy. We also have a number of two bedroom apartments available to buy via Shared Ownership.

Also in the heart of Royal Albert Wharf and part of the exciting riverside community, we have our more recently launched Gallions Place development which consists of one, two and three bedroom Shared Ownership apartments.

Heading over to North Woolwich, we have one, two and three bedroom apartments at Woolwich Reach, available via Shared Ownership. These apartments boat stunning views looking across the River Thames, the city or the nearby King George V park.

View more of our developments in East London

This blog was originally posted in October 2017 but has since been updated.